10 Tips for Good Behaviour at Christmas

10 Tips for Good Behaviour at Christmas

Christmas is a magical time of year. There is SO MUCH excitement to be had about decorating the house, the anticipation of Santa coming AND the best part – opening all those presents Christmas morning!

So, it is not a wonder that the Christmas season can be an overwhelming time for children… with all those Christmas parties, family commitments, sugar overload and general excitement, it’s the basic recipe for over-tiredness, meltdowns galore, and literally… tantrums for days.

But that doesn’t mean there aren’t things that can be done to help Christmas run a little smoother and prevent some of those meltdowns and tantrums, so I’m sharing my 10 best tips for good behaviour at Christmas:

You might be thinking “perhaps I’ll just control their sugar intake” or “I’ll limit how many lollies and chocolates they have” …but you know what? Getting full of sugar and running around like a crazy person with all the excitement of Christmas morning is basically a rite of passage for kids.

So embrace it, but plan your day around it.

If you’re anything like our family, your meals tend to have a general focus on healthy eating avoiding sugar.

But in saying that, we’re also that family that serves soft lollies, cheesels, and shortbread for breakfast in front of the Christmas tree on Christmas morning.

It’s a special treat and one that’s only allowed on that very special day once a year.

2. Get the Energy Out

It can be helpful to have a toy or game that can be used outside (and involves running or jumping or similar).

Once they’ve gotten all hyped up on chocolate and lollies they’re going to need somewhere to put all their excess energy.

So, if you can, arrange for one of their presents to be an outside toy that’s going to help get that energy out.

It’s also a great way to give you some space in the kitchen while the Christmas lunch is being prepared!

3. Engage with the Meal

Christmas seems like an awesome opportunity for kids to let their parents know how much they despise particular foods (which can be particularly hard to take when you’ve spent hours preparing the meal and slaving over a hot stove… especially over here in Australia when it’s probably already 40 degrees!!)

There are a few things you can do to encourage your kids to embrace the Christmas meal.

If you haven’t got them outside engaged with their new high-energy toy, get them to give you a hand preparing the meal. Children can do things like peel vegetables, pass you items from the cupboard or fridge, set the table… etc.

Another handy tip is rather than dishing up your child’s meal for them, arrange all the food in the centre of the table, where your child can dish up their own plate. They are much more likely to eat the food they have placed in front of themselves, than food that has been dished up for them.

Once the Christmas meal is finished, everyone is going to be feeling pretty exhausted… except maybe the kids.

This is the time where it is really handy to have pre-prepared some form of “quiet activity” for the kids to engage in.

One way to get them excited about this (or calm about this!?) is to include some quiet activities within the presents they are given. Some suggestions include books, movies, colouring, stickers, drawing, playdough, craft (think jewellery making, origami, knitting or weaving baskets, sewing, beading… etc) essentially anything they can sit down and do quietly will work!

I hear a lot of parents saying things like “If you don’t behave yourself, Santa won’t bring you any presents”.

a) Not many kids (or many adults for that matter) will know what “behave yourself” means. It is such an open statement that it could mean anything… For example – does it mean that I have to sit quietly when Mum’s concentrating… does it mean I need to stop arguing with my siblings… does it mean I need to make sure my school bag is unpacked at the end of every day… I have no idea!

It could mean all those things, or it could mean that Mum want’s me to stop whinging about being stuck in the trolley while she scrambles around doing the Christmas shopping… but I’m not likely to put two and two together unless she’s given me the explanation of what she wants me to do…

Rather than saying “If you don’t… Santa won’t…” leave Santa out of it and explain the behaviour you want to see (and what the consequence is for not following the behaviour). Using the shopping example it could realistically be “I need you to be patient while we do the shopping so, we can make sure we have presents for everyone on Christmas Day”

b) Most parents won’t follow-through on the “Santa won’t bring you any presents” threat. Most kids know this, so making an empty threat is likely to only elicit the behaviour you want to see while you are watching (kids won’t want to hear the threat either way and will want to do the right thing just in-case you’re bluffing, but its unlikely to change their behaviour long-term).

If you are going to use the “Santa” threat, phrase it in a different way, to positively frame the behaviour you are looking for. For example:

“Packing away all your toys at the end of the day helps show Santa you are ready for new ones.”

“When you come and help me with the shopping without complaining, Santa see’s how helpful you are.”

6. Give the Gift of Giving

So many parents talk about how children lack gratitude due to being able to have anything they want, whenever they want…

…which isn’t necessarily the problem. Children can still learn to have gratitude while still having all their wants and needs met.

Christmas is the prime opportunity for helping your children learn gratitude by giving to others. There are lots of ways you can do this.

For example, sit down with your child and help them make a list of the people they would like to buy presents for, and help them think about a present that each person would really like, and WHY that person would really like that present (you may need to work on this one a bit as a lot of children have a tendency to buy for others things that like themselves… and so do adults too!)

Once the list is complete, go with your child to the shops, help them pick out the presents as well as cards and wrap.

This is also a good opportunity to help your kids learn about budgeting and money… set a price limit for each gift (or an overall budget for them to spend) or even better, encourage them to use their own money they have earnt to purchase the gifts!

Another activity you can do with your children is to find out where they can purchase toys or other non-perishable items and donate them to other children and families in need.

Staying with the theme of gratitude, this strategy is about helping your child recognise and respond to the needs of others.

On Christmas day, get your children to take turns giving presents out to one another (and to the adults in the room). Rather than having everyone open their presents at the same time, encourage the children to watch as each person opens their present and help them take part in observing others appreciate the presents they are given (particularly important when the person is opening a present purchased and wrapped by your child!)

You may also wish to help your child reflect on gratitude by prompting them with questions (during the lunch meal is a good time!) for example:

For some children, receiving a large number of gifts at once can be quite overwhelming, and it can be difficult for them to know how to handle all the emotions associated with receiving presents (plus there’s the fall-out of the excess sugar which adds to the overload too!)

One way to help prevent your child being overwhelmed is to help them organise their gifts and work out which one to play with first.

This can help reduce the overwhelming feels they have over not knowing what they want to do first, and also helps to give more value to each gift, as they know they are setting aside time to play with each one.

9. Set them up for Success

Help your kids understand that Christmas can be an overwhelming time. Explain to them that there is going to be lots of yummy treats, presents, and excitement, and outline what the plan for the day is, and talk to them about how you expect them to behave throughout the day.

“First we are going to have breakfast where we can all enjoy yummy treats.”

“Then Nan & Pop are coming over and we will all take turns giving each other presents.”

“After that, you can play outside with your new toys.”

“As we get closer to lunch time, I will ask you to come in and help me set up the table.”

“After lunch, we will have some quiet time when you can play with your new indoor toys.”

“Then we will watch a movie.”

If you have to travel throughout the day your conversation might look and sound a little different (and the times you arrange for “getting all the energy out” and quiet time might be structured differently) but the important thing is that you communicate to your children what you expect from them before the day comes, and prompt them with your expectations throughout the actual day.

Last but not least… Christmas isn’t just about the kids! Even if you throw all the strategies out the window and revert back to strategy one “Embrace the Chaos” that’s totally cool too.

It’s just one day of the year after all and the main purpose is for everyone to have fun (including you)!

How do you make it through Christmas without the meltdowns? Let us know in the comments below 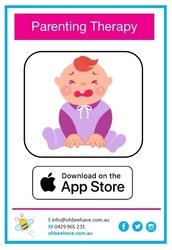